Seven years have passed and the end was not in sight. Graphic designer Naveed Ali considered himself lucky for having stayed in one company for that long. The income was stable and he liked his job. True, there were things that irked him, such as the hours, company policies, and lack of rewards for his efforts, but the job brought food to the table and that's what mattered.

Naveed, from Karachi Pakistan, worked 12-hour days. That didn't include the three hours he spent in a bus, cramped and filled to the brim, to commute to work. He earned 11,000 Pakistani Rupees (US$108) per month. He lived with his parents. He said he had no time to mingle with friends or spend time with family.

May is the hottest month of the year in Pakistan and an especially difficult time for commuters. That month in 2007, Naveed, squeezed into a tightly packed bus, with his shirt soaked in sweat and clinging to his back and torso. The day was only beginning but he was already exhausted. He then realized, he could either do this for the rest of his working years or find a way out.

His ticket to a new beginning came in the form of a website on a colleague's computer screen. "I saw he was browsing GetAFreelancer.com. I asked him what it was for and he said he was looking to hire freelancers for a project." That night, after Naveed got home, he created an account.

He worked part-time as a graphic artist on GAF, now Freelancer.com. His first project was a logo and banner design for a client called Brent. "I worked on the logo for 24 hours. After I submitted the design to him, he paid me US$99 and I thought, is this real?" He couldn't believe that an online job he did for a day would pay as much as he earned in a month. 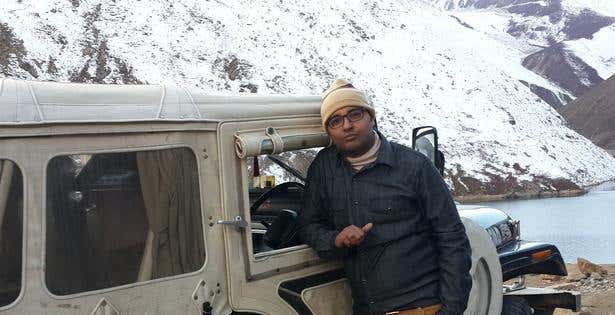 After saving up 30,000 PKR (US$300) through working online, Naveed decided to up his game. He borrowed money from a friend to add to the funds needed to purchase a new Dell Core 2 Duo computer. Freelancing, coupled with working full-time, then allowed Naveed to save enough money to purchase his first car after a year -- a 2003 Suzuki Cultus in Sky Blue.

That same year, Naveed also left his office job to focus full-time on freelancing. "My earnings as a freelancer were much more lucrative than my full-time job. I then built my own company, Crea8ivedesign, and hired four team members, Asif Ali, Imran Arshad, Fahad Ali, and Nayyer Ahmed. It has been seven years since we started and we have no plans on stopping."

The team set up office at the Technocity Mall in Karachi. Naveed purchased the shop where he bought his first computer. "I have everything I wanted, granted my parent's wishes, and travelled to places. My biggest investment yet was in 2010, when we moved to our new home, a bungalow with a garden."

Naveed said on his journey: "I started out with nothing but today we're one of the top designers at Freelancer.com. Anyone can do the same by being professional, honest, and hardworking."

Check out the latest list of time trackers for freelancers and select one to meet your needs the best.

Freelancers have the incredible flexibility to work nearly anywhere. If you ever find yourself international consider some of these tips.