Cyan Ta’eed is the Co-Founder and Executive Director of Envato, the world’s largest digital marketplace with 5 million members who actively buy and sell digital stock and services. Since the creative ecosystem’s founding in 2006, the company has accumulated over $250 million dollars in earnings. 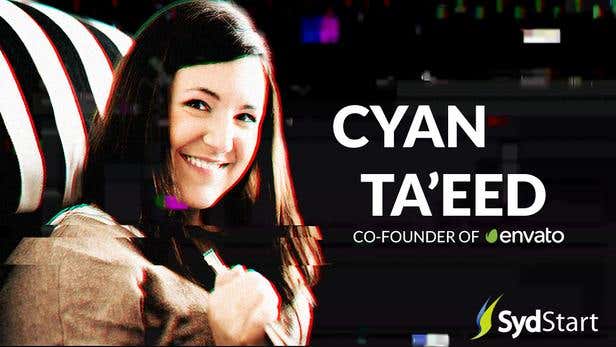 Starting out as a graphic designer, Cyan met her husband Collis who likewise shared a passion for the same industry. Together they founded Good Creative, a graphic and web design agency which handled clients including small businesses, music labels, and local government.

Together, the creative duo additionally founded FlashDen, a dedicated marketplace for Flash files, which later grew to eight marketplaces and evolved into Envato. In the course of FlashDen’s founding, they had launched Psdtuts+ FreelanceSwitch, ThemeForest, AudioJungle, VideoHive, GraphicRiver, CodeCanyon, PhotoDune, and 3dOcean.

The talented visionary attributes the digital marketplace’s success to focusing on “building on a good product as cheaply without taking a lot of investment." She further adds (in an interview with SmashingMagazine.com) that they benefited from the “Internet’s maturation in terms of development and audience," and the community consisting of readers, contributors, and reviewers that followed them.

Envato has been commended by The Next Web, The New York Times, and GD USA for pioneering the sales of creative stock assets to graphic and website designers, illustrators, photographers, videographers, and sound producers.

Apart from creatives and project management, Cyan is passionate about gender diversity in entrepreneurship and technology, and urging people to be interested in tech and startups. With success as stellar and spectacular as Envato’s, the tech innovator and creative has also started New Day Box, a social initiative that encourages women to craft boxes for skincare and cosmetics to help address the domestic violence crisis. Founded in 2013, New Day Box  has delivered over 2000 to women in Victoria with the help of their network of volunteers.

Freelancers and employers can now work together on location-specific jobs!

If your reader can’t understand the words you use to explain what you have on your mind, there is no way they could understand your idea nevertheless.