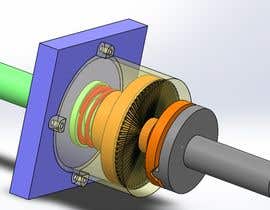 I am designing a mechanical system using servo motors, so this serves as a driving component and there is the rest of the mechanism, which could be called a driven component. Servo motor produces 180 or 270-degree rotation with a particular torque, I don't want to lose or change either (stay constant). We know that in many cases if a torque is applied to the driven side, the driver rotates. The clutch could be used to disengage the driver and driven, but still, the driven can rotate, so brakes are used to stop the driven side. And both the clutch and brakes are either manual (mechanical) or electric which works on an external trigger, which I don't want.

So I designed a clutch that has a spring-loaded cam mechanism such that when the driver rotates, the cam turns to disengage the driven side from a fixed (locked) end and engages to the driver. But the problem is it loses a lot of angular motion when the driven side disengages from the fixed end and engages the driver. I am not making a precision machine, so I can allow the loss of 5 degrees max (out of 180-degree rotation). But my design was losing more than 10 degrees.

I am using a variety of servo motor, but the design is for 25kg, 30kg, 35kg, and 60kg servo motor, you can see a model on Amazon or get a free 3D model on websites like GrabCAD.

Which is a winning entry
1) Complete 3D model provided in SolidWorks format or any CAD neutral format (STEP, Parasolid preferred), with details of components that could be purchased easily, or produced easily on a 3D printer like the frame/housing of mechanism
2) If not a 3D model, then even a detailed 2D sketch with details of parts to purchase or produce
3) In either of the case above, the design should be a working concept, with minimum parts, without any other external source or trigger, the mechanism (driven) should be locked and only turns when the driver (motor) turns, the angular loss should not be more than 5 degrees and similarly only 5% power loss is allowable.

What else is for you after this?
As mentioned, I am working on a mechanical system and I am coming across many similar design situations where I need out-of-the-box solutions and I will directly open it up to you slow and steadily, engaging in the full project, sharing profits.

Feel free to ask if you have any query

“Abdul had taken the contest seriously like a professional, he was clear with the intent and provided several solutions, while others were still wondering if it is possible. Great job Abdul, some times there is no perfect solution or no solution at all, all matters is the hard work and the right spirit.”