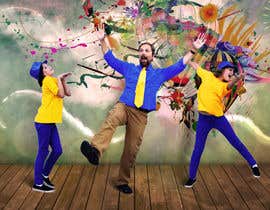 Hi folks. I would like pieces from the attached pictures (EH1.jpg, EH2.jpg, EH3.jpg) cut out and put together onto a fun background. The picture with the file labeled "EH_what_to_cut.jpg" shows which person to use from each picture. When arranged together, the three of us should be in the same relative positions (i.e., blonde girl on the left, me in the center, dark-haired girl on the right). I would also like the photo images improved as far as the color, lighting/contrast, sharpness, etc.

For the background, keep in mind that we are a kids/family music act, but we perform more rock oriented music with a lot of comedy, so I'm much more interested in something that looks cool and appeals to a wider and older age range of kids, as opposed to something that is more geared toward toddlers or babies.

I've attached the winning pictures (EHTP_promo_02_med.jpg and EH&TPP_PromoPic1_med.jpg) from two previous contests involving my full band as examples of what I like both in terms of the look and coloring of the photo image and also the creative background.

IMPORTANT: For whatever you add as the background, DO NOT ADD LICENSED MATERIAL OF ANY KIND. If you use imagery from Disney or Pixar or Star Wars or anything like that, then I CAN'T USE IT. I need to emphasize that because I hate to see your time and effort wasted. Also, I'm not a fan of musical notes and certain other graphical things like that... but especially musical notes. We are a musical act, but I don't need that implied from imagery. I'm not saying I won't consider your entry if it has musical notes in it, but if you add something like that, it really needs to be done in a very creative way.

Any questions, please let me know. I will try to give feedback as best I can throughout the duration of the contest. And though I can only choose one winner, there is a chance that I will want to offer something as a "runner-up" prize to be able to use other entries that were also great.

Be creative and have fun!